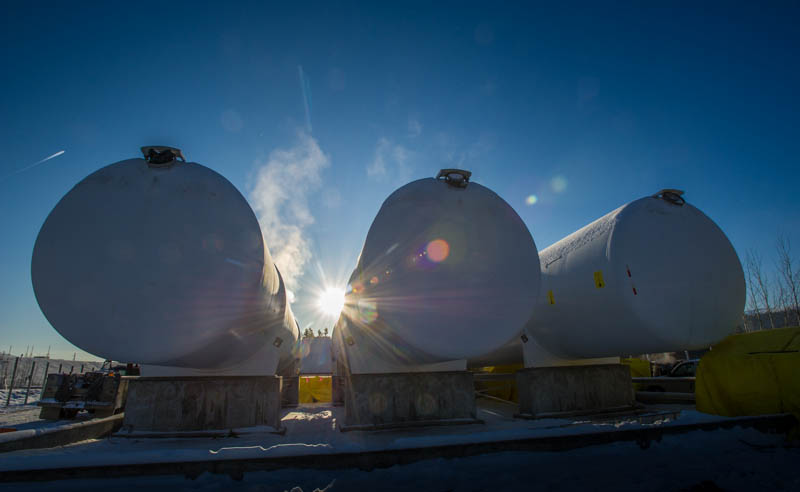 Today's question: What percentage of LNG is actually used to produce power? How much is burned as "boil off gas"? I thought the LNG was supposed to replace the diesel, so why are there still diesel generators?

Thanks for your questions. I will answer them in order.

1. About 99 percent of the electricity we generate at Yukon Energy is from renewable sources (hydro plus a small amount of wind and solar) and one percent is thermal (either LNG or diesel). Of that one percent, approximately half was generated with diesel this year and the other half with LNG.

2. Since the LNG plant began operating in June 2015, 78 percent of the LNG has been used for generation and the rest (22 percent) has been boil-off gas, used for periodic run-ups of our natural gas engines and to heat our diesel plant. This works out to a daily rate of 0.147 percent of the entire volume of LNG received, which is slightly better than the 0.15 percent expected as per the plant design.

3. We have approximately 40 megawatts of thermal (close to nine megawatts of LNG and just over 31 megawatts of diesel). Our thermal fleet provides backup generation and peaking power, and meets our energy needs in times of droughts or if we lose any of our key hydro plants or transmission lines. We installed 8.8 megawatts of LNG last year to replace two diesel engines that had reached end of life. Most of the remaining 31.2 megawatts of existing diesel engines still have many years of useful life. It's worth noting that LNG and diesel units each have their specific strengths. LNG is best for running over longer periods of time (for instance in very cold weather when we know we need to supplement our hydro for extended periods, or during times when a hydro plant might be shut down for maintenance) and diesel is best for helping to restore power outages. By having both, we can choose the most efficient option based on the situation.

Commenting is not available in this channel entry.

Now what percent of the 22 is used during the heating season, and how much is used to heat the river in the summer?

Jonathan. All 22 percent is used in our operations. None is used to heat the Yukon River.